Plethora of ancient sites and big destinations in the vicinity. Big opportunity to add together best locations and form a complex tour.

Walk past the Kusadasy harbor to the charming Pigeon Island, where the remnants of a 13th-century Byzantine fortress, which later became a pirates' lair, sit on the cliff. Hike past mountain vistas to the ruins of the Hellenistic city of Priene. Wonder at the diversity of sites in ancient Miletus: amphitheater, Byzantine fortress walls, the remnants of the Temple of Apollo and surprisingly well-preserved Baths of Faustina.

Explore the giant national park area in Dilek Peninsula with many beaches for swimming and sunbathing, like Aydinlik Beach and Karasu Köyü Beach. Ascend to the popular tourist attraction within the reserve, with excellent hiking opportunities on the park's network of forest trails, The Cave of Zeus. Tie a cloth piece on a wishing tree next to the cave's mouth and guess a wish.

Travel to the ancient world's second-largest temple Oracle of Didyma, only second in authority to the Oracle of Delph, in the area where Temple of Apollo, one of the best-preserved examples of Greek temples in Turkey, still boasts its towering columns.

Get astonishing pictures at the gates of the wide site of ancient Ephesus near Selcuk, the site where the glorious temple of Artemis once stood, one of the Seven Wonders of the World.

Visit the neighboring big Greek island of Samos, the birthplace of the Greek philosopher and mathematician Pythagoras. Travel to the third largest city in Turkey, Izmir, known in ancient history as Smyrna. Amaze yourself with fantastic sites of Pamukkale and Hieropolis, a natural spa and a well-preserved ancient city.

Kusadasy cuisine, as much of the Aegean coast of Turkey, thrives with pastries, wrapped stuffed wine leaves, sauces, and rice dishes with vegetables, as well as plenty of grilled meat dishes. 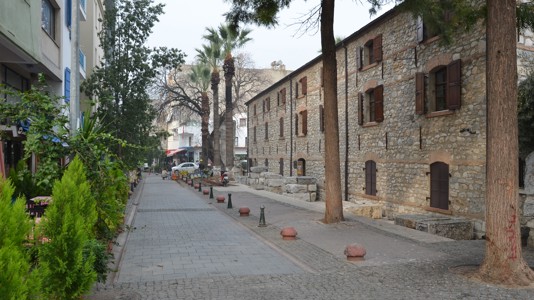 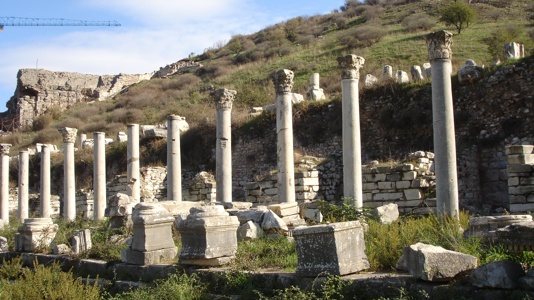 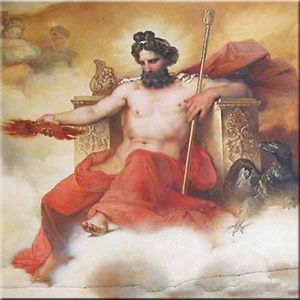 According to Ancient Greek mythology, Zeus, the Olympian ruler of the skies, used to hide in the cave to escape the fury of his brother Poseidon, the ruler of the seas after Zeus angered him. Poseidon, in his wrath, would unleash very high waves and other dangerous water conditions with his trident.

Ancient Pygela, a small town, with a temple of Artemis Munychia, was founded by Agamemnon and inhabited by a part of his troops.

Ephesus (Ephesos), is a son of the river-god Caystrus, who was said, conjointly with Cresus, to have built the temple of Artemis at Ephesus, also named the town after himself.

Caystrius (Kaustrios), a son of Achilles and the Amazon Penthesileia, from whom the river Caystrus (now Little Menderes) was believed to have derived its name.