Shores on both the Asian and European sides of the Dardanelles Strait, one of the two major water passages connecting the Mediterranean and Black Sea, and joins the Aegean and Marmaris Seas.

Most of the interesting sites of Canakkale are located around the coast of the straits and Aegean sea. Start your tour of the city with Cimenlik Castle, which also houses the amusing Naval Museum. Walk downtown Canakkale to view the Trojan Horse prop featured in the movie Troy of 2004. Remember the history of big dramatic battles, which happened on the Gallipoli peninsula at the site of many cemeteries and war memorials, like the Martyr’s Memorial. Visit the charming fishing village of Kilitbahir with its main attraction, Kilitbahir Fortress. 15 mins by ferry from Canakkale. Ride to the main attraction of the area, the site of ancient Troy with a replica of a Trojan horse.

Admire the spectacles of Assos ancient city with its temple of Athena, an acropolis and stunning sunset views of the Aegean and Lesbos. Head south for Alexandria Troas ancient city with ruins of an amphitheatre, necropolis, stadium, homes, and baths built over natural hot springs. Feel the spirit of the ancient city of Abydos in and around Canakkale.

Try the best fresh seafood of the region in traditional restaurants like Yalova and Kavala Balık Lokantası.

Enter Bozcaada, or Tenedos, which feels very similar to holidaying in the more popular Greek islands, with many wineries, a castle and colourful streets.  Get more Greek cultural experience at the second island, Gokceada, or Imbros. 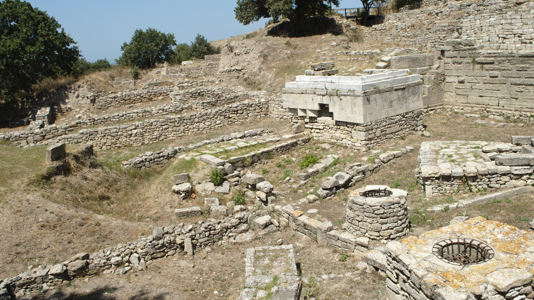 Many cities and towns around Canakkale are mentioned in Homer’s classic poems Iliad and Odyssey, such as Troy, Bozcaada, Abydos, and Assos.

Aristotle lived in Assos for three years and founded a school there.

Alexander the Great believed he was descendent of Achilles and visited Troy to sacrifice to the goddess Athena on his way to invade Asia.

Roman emperors Julius Caesar and Augustus believed themselves to be descendents from Aeneas, the rumoured sole survivor of the destruction of Troy.

Abydos, former ally of Troy, was often stuck between disputes of Athens, Sparta, Macedonia and Persia, is an ancient city where the story of Hero and Leander took place, a tragic love story. Hero was a priestess of Aphrodite in Sestos on the opposite side, and Leander was a young man from Abydos who swam to her for months. But one day a sea storm took his life.