Skopelos town alleys mark the scenes of Mamma Mia. This is an incredibly green and lush island with absolutely amazing amounts of vegetation. Skopelos is a very ecological destination. It has no airport and not too many tourists.

Island’s capital, Hora, or Skopelos, has the official status of a preserved traditional heritage settlement by the Greece government. View the entire surrounding area from the Castle of Skopelos in Hora. Visit the site of the ancient temple dedicated to Asclepius located next to a beach in Ambeliki. Admire the remnants of the Roman Baths in Loutraki.  Visit the site of king Stafylos’ grave in the namesake village. There are also two beaches right next to the site. Touch the tale at an impressive rock, Drakontoschisma, associated with the legend about a terrible dragon that used to terrorize the island, until he was scared away by Saint Riginos.

Reenact scenes from the movie Mamma Mia, which was filmed on Skopelos.

Take rest at Adrina Beach, which got its name from the only female pirate Adriana, who raided during the times of Venetian conquests. Take a few bites at the Adriana beach Taverna. 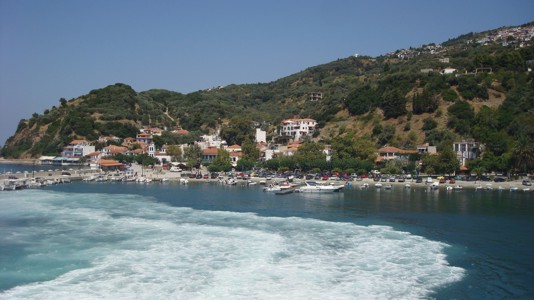 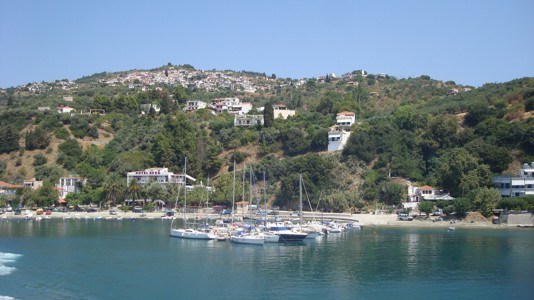 Current name of the island, Skopelos, is taken from the rocky northern coast. Skopelos in Greek means obstacle. Old name, Pepartithos, was based on the name of one of the two brothers, the other being Stafylos, first inhabitants of the island. They were two out of four sons of god Dionysus and Ariadne. Skopelos’ early dynasty from king Stafylos were Cretian or carriers of the Minoan civilization. Stafylos took part in the journey for the Golden Fleece together with Jason and the Argonauts.