Take a picturesque trail right from the Livadi port to the capital Hora (that’s a usual name for a Greek island’s capital). Strall up the hilltop of Hora to its oldest part occupied by the Castle complex, including the Town hall, Square of the Windmills, Archaeological Collection, and Church of Evangelista. Catch the sunset or the starry night sky view from the Church of Agios Konstantinos. Visit the 16 century monastery of Taxiarches. It is dedicated to Archangel Michael and Gabriel and has a wooden carved screen with a throne.

Walk along the Old Mines to see the loading bridge, arched rooms, railway lines, old wagons and abandoned mine workers village. Serifos was even called the “iron island” for its iron ore deposits. Sit on the throne of Cyclops - a rectangular slate building. Go down to see the cave of Cyclops. Go around White tower – a Hellenistic marble watchtower (c. 300 BC). Visit the church of Agios Ioannis Theologos. It’s carved into the rock and believed to keep the legendary head of Gorgon Medusa in one of the catacombs. Observe the Aegean from the Lighthouse of Serifos. Find out what the Katikies, the Linies and Mitata are on the path from Hora to Kallitsos.

Get comfortable on the soft sand of the beaches. Ganema and Psili Ammos are the most beautiful ones: first being deserted and the second one is quite popular. Taste fresh fish at Avessalos Beach. Try also marathotiganites (a funnel with onion served with yogurt), xinomizithra cheese and revithada (baked chickpea stew). Use a chance to buy liquors, jars, and herbs on the local products market in early August. 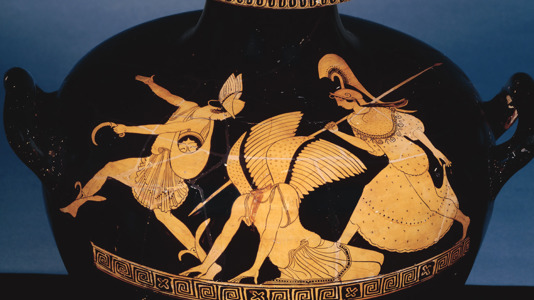 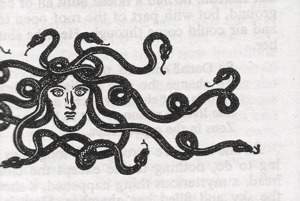 Serifos is one of possible areas inhabited by Cyclops in the cave close to Psaropyrgos.

Perseus, the son of Danae and Zeus lived here. Danae’s father, king of Argos, Acrisius, in response to an oracle that his own grandson would kill him, set Danae and the baby adrift at sea in a wooden chest. It was washed ashore in Serifos. Dyktis, the first king of Serifos, welcomed Danae and Perseus. But the second king of Serifos, Polydektes, fell in love with Danae and sent Perseus to kill Gorgon Medusa. Medusa was notorious for petrifying anyone who stared at her. Perseus killed her with the aid of the weapons of Gods, mainly with the shield of Athena that he used as a mirror to avoid looking directly in her eyes. Then he returned to Serifos, demonstrated the head of the Medusa and turned Polydektes and his retainers into stone. That is the reason why the island is so rocky.