Healthiest of the Aegean, thanks to its mineral rich springs and vast forests of pine trees and olive groves, Lesbos was a famous resort during Roman times.

Start in the island’s capital, Mytilene. Explore Castle of Mytilene, which hosts tombs and a sarcophagus as well as a sanctuary in honour of ancient goddesses Demetra. Admire Ancient Greek Theatre in Mytiline, that dates back to the Hellenistic age and is thought to have been as important and beautiful as the Ancient Theatre of Epidaurus. Get amazed at the mastery of roman aqueduct near the capital.

Pass by Plomari, a beautiful summer resort, with a strong cultural tradition of high quality ouzo and olive oil production. Check the beautiful village of Agiassos, an area that maintained several parts of the local culture such as pottery and wood carving. Glance at the Ancient Temple of Klopedi, the sole example of Aeolian architecture around Greece.

Ride to the Petrified Forest in Sirgi, a living timeline of the Aegean’s geological heritage. Drop your jaw at 12m waterfalls of Man Katsa. Heal at several hot springs of Lesbos such as Agios Ioannis and Polichnitos, both operating since the Ottoman occupation, the latter being the hottest one across Europe. Appreciate the therapeutic effect of these springs located next to the volcanic crater, where one old earthquake caused once even made a forest reappear out of the water. Climb into any of Lesbos’ 200 Caves, some of which had been inhabited since the Neolithic times and were used as places of worship. Check the island's best cave of Megara with unique labyrinthine chambers, stalactites and stalagmites, and Agios Ioannis or Fousa, featuring two beautiful chambers made of marble. And don’t forget Agios Vartholomaios or Kagiani cave with a central chamber, which once happened to house Prehistoric settlements. Experience any of Lesbos’ hiking trails deep inland.

Get a complex deal at Eftalou. It is one of the most wonderful beaches of the area with silver waters and natural springs streaming next to it.

Taste the local drink, ouzo, which developed here. Grapes skin along with several herbs and spices such as anis which gives its distinctive taste, result to a highly alcoholic distilled product that accompanies every local “meze” - small plates of savory snacks that are served as a complement to drinks, such as salted sardines from the Kalloni Gulf, being the tastiest across the country, grilled octopus and clams. 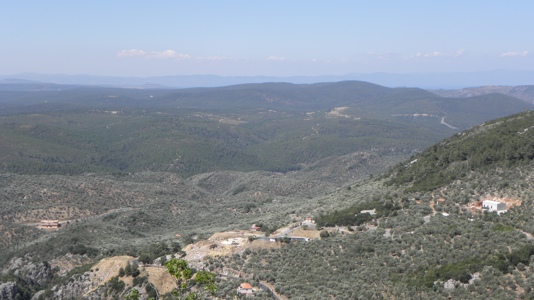 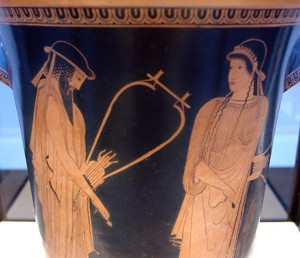 Before becoming advisor to Alexander the Macedonian’s father, Phillip, Aristotle used to live on Lesbos for some time. It is also the birthplace of Aristotle’s student, famous philosopher Theophrastus.

Son of Hermes and Issa, Prilid, also lived on Lesbos. He predicted Troy’s defeat via a wooden horse.

Filomed, a famous strongman of the island, was defeated by Odysseus.

Alcaeus of Mytilene, as well as another poet Sapho, are included in the canonical list of nine lyric poets by the scholars of Hellenistic Alexandria.