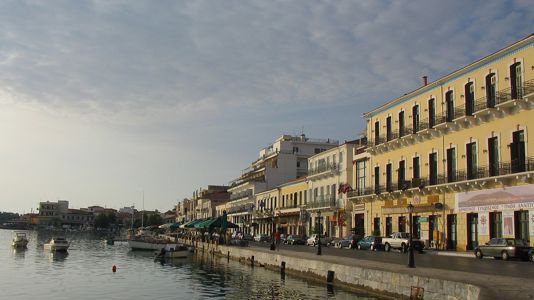 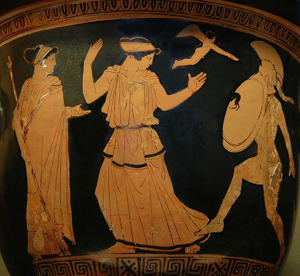 The founders of ancient Gytheio were Heracles and Apollo.

Cranae island is a place where Paris of Troy and Helen from Sparta spent their first night together before departing for Troy, thus igniting the Trojan War.

The legend has it that Paris was so hasty, that he left there his helmet and that is how the islet took its name (helmet in Greek is “kranos”). Some believe that the name Cranae (Kranai) comes from the legendary king of Athens Kranaos, the as Athens was also known as "Kranaa". According to Homer the word Kranaos has the meanings: 'Rocky', 'ragged', 'hard'.

Lacedaemon was a mythical king of Laconia. The son of Zeus by the nymph Taygete, he married Sparta, the daughter of Eurotas. He named the country after himself and the city after his wife.

The Trojan War, one of the most important events in Greek mythology, was waged against the city of Troy by the Greeks after Paris of Troy took Helen from her husband Menelaus, king of Sparta. Helen was said to have been the most beautiful woman in the world and was promised to Paris by goddess Aphrodite in the Judgement of Paris. Menelaus with his brother Agamemnon, king of Mycenae led Achaean troops to Troy and besieged the city for ten years. After the deaths of many heroes, including the Achaeans Achilles and Ajax, and the Trojans Hector and Paris, the city fell to the ruse of the Trojan Horse.

Lycurgus was the quasi-legendary lawgiver of Sparta who established the military-oriented reformation in Sparta in accordance with the Oracle of Apollo at Delphi. He promoted the three Spartan virtues: equality (among citizens), military fitness, and austerity.

He gave up the kingship of Sparta and transferred it to his brother’s son, travelled a lot, and came back to make reforms:

But it is possible that "Lycourgos" was only an epithet of the god Apollo.