Novigrad is a small town, once a fishing village, situated on the west coast of Istria that turned into one of touristic jewels because of its rich cultural heritage, breathtakingly beautiful nature and fascinating Mediterranean charm. Inhabited since the times of ancient Greece, it preserved its peaceful fishing village spirit through centuries, and it is one of the less touristic towns across Istria.

Stroll around the narrow pretty streets of the old town and admire the ramparts built in the 13th century. Visit the most famous landmark of Novigrad, St. Pelagio and St. Maxim’s Parish Church with early Roman crypt, beautiful Baroque paintings and frescos and a beautiful bell tower. Fall in love with Baroque architecture at the Palace of the Counts of Rigo built in the second half of the 18th century. You can also have a look at the collection of art housed in the palace. Marvel at the collection of archeological artifacts and relics of Roman and Medieval times. Admire the collection of ancient stones at the Lapidarium museum. Learn everything about the maritime history at the  Novigrad Austro-Hungarian Navy Museum Gallerion. Gaze at the stars at Visnjan Observatory. Have fun and play sports at Istralandia aquapark. Chill at the annual summer blues music festival.

The town area has also various beaches to offer:

Rivarela beach is a paved beach along the promenade street that is perfect for people who love socializing and enjoy the comfort and various amenities. Beautiful Maestral pebble beach is clean and very well equipped. Aminess Laguna beach is a mix of pebbles/stone type and is perfect for families with children as there is a shadow area too. Aminess Serena and Mereda beaches are located on campsites. Pebble Karpinjan beach is surrounded by pine trees and is perfect for visitors with small children and people who are not so good at swimming due to shallow waters. Pineta stone/pebble beach is quite wild, is surrounded by a pine forest, and offers some cool areas. 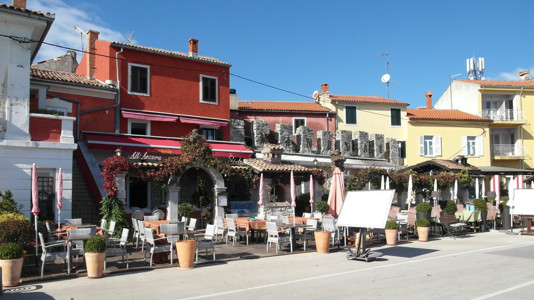 The region of Istria is home of many myths and legends.

One of the most famous ones has it that long time ago Istria was inhabited by giants, but after they got poisoned by the dwarves, only one giant per city survived. The giants served humans and performed the hardest jobs. Veli Joze was the giant of Motovun town. Once he was travelling to Venice on a boat and met Elijah the galleyman, who taught him the idea of freedom. The galley wrecked in a storm, but the giant survived and decided to encourage other giants to rebel against their cruel human owners. Once again, the sneaky dwarves tricked the giants and bribed them with wine and gold. All the other giants went back to their owners and remained their slaves. Veli Joze hid in the hill near the Mirna river valley and is still waiting for a moment to return.

Another old legend originated in 2nd century BC, when Istria was inhabited by one of the Illyrian Greek tribes, Histrians. The Romans tried to conquer their land, but to no success. Finally they sent a very big army and the Histrians led by king Epulon had to retreat to Nesactium city at the southern edge of the peninsula. Histrians successfully defended for months, but the Romans diverted the flow of the river leaving the city without any water. Proud King Epulon, his soldiers and his family decided to stab themselves with swords on the city walls.